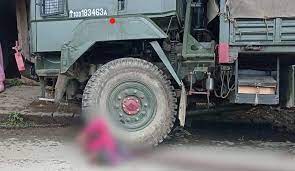 Bandipora, Jul 14 (GNS): An elderly woman was mowed down by an army vehicle in Nadihal area of north Kashmir’s Bandipora district on Wednesday afternoon.

Reports reaching GNS said that the woman was ran over by an army vehicle near JK Bank. The woman identified as Hussan Jani wife of Habibullah Khan of Checkiarslakhan Gojer of Kavnoo Chittibanday Aragam, died on the spot, they said.

A police team reached the spot immediately, they said.

SSP Bandipora when contacted told GNS police was ascertaining details and further action as required as per the law would be taken. “We are ascertaining the facts and action as warranted under law would be initiated against the erring driver,” he said.

A police official said that a case (FIR No 30/2021) under section 279 (Rash driving or riding on a public way) and 337A (related to hurt to any person by doing any act so rashly or negligently as to endanger human life, or the personal safety of others).

Meanwhile local residents in the area assembled at the spot and demanded action against the erring driver. (GNS)